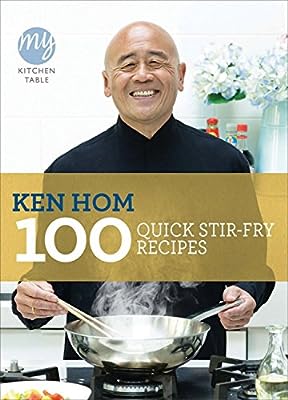 View eBay Options
Usually dispatched within 2 to 3 days.
Product Information (more info)
CERTAIN CONTENT THAT APPEARS ON THIS SITE COMES FROM AMAZON SERVICES LLC. THIS CONTENT IS PROVIDED 'AS IS' AND IS SUBJECT TO CHANGE OR REMOVAL AT ANY TIME.

This paperback book holds 100 Recipes from Top favourite Chinese Chef Ken Hom. This book will give You 100 Delicious Recipes from Chicken to Vegetarian dishes.

Following reading the book you will be able to Entertain your riends and leave them in awe of your cooking.

Healthy food such as salads modern & Traditional ,Curries ,even appetizers ,snacks and side dishes.  You will beable to simply follow his instructions All Made in the 10 PC WOK .

Ken Hom is regarded as one of the worlds greatest authorities on Oriental food and he still today tirelesslytravels the world to appear on TV shows ,and still writes books and gives Consultations for Restaurants.

He was awarded a honorary doctrate from Oxford Brookes University in 2007 for his outstanding sucess in the International food world,

Ken started out in his career working in his uncles restaurant in Chicago and went on to teach at Califrnia Culinary Academy.

He has been on many Cooking shows and an article in a NewYork Newspaper in 1984 led to his very own TV series and in total as carried out 5 Series for the BBC which were transmitted internationally.

Review "It's not often that you find a collection of mini cookbooks that inspires you with so much confidence,

but My Kitchen Table's series of 100 recipes by various chefs is a classy production.

There are no customer reviews yet. Be the first to Write a Review!

Juice: The Ultimate Guide to Juicing for...

The Complete Book of Juicing: By Author ...

Juicing for Health: How to use natural j...

The Best Products on eBay

Cookies help us deliver our services. By using our services, you agree to our use of cookies. Learn More Accept

Wait! We have something for you...

Don't leave empty-handed! Simply enter your email below and we will send you a great discount on our products:

We hate spam as much as you do! Your details are never shared and you can unsubscribe at any time.